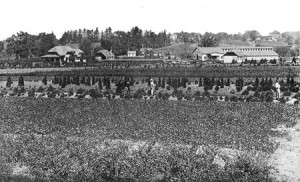 Encompassing nearly 530 acres in South Brunswick and Plainsboro townships, the Princeton Nurseries properties lie in the southern end of the Kingston greenbelt. These present sites of rich natural and historic interest, ranging from stream corridors and wetlands, woodlands, and prime agricultural lands to nursery structures of compelling historical and educational value.

The Princeton Nurseries Kingston Site was established by William Flemer, Sr. shortly before World War I, and grew to become the largest commercial nursery in the United States by the time it left Kingston in 1995.

In 1911, after a thorough search of sites in the eastern U.S., William Flemer, Sr. chose Kingston, south of the recently completed Carnegie Lake, as a site for his wholesale nursery. At the time, commercial transportation moved by rail or boat, and the Kingston location, halfway between New York and Philadelphia and on a branch of the Pennsylvania Railroad and along the D&R Canal, offered great logistical advantages. The soil, rich loam created during the last ice age, is virtually free of rocks and stones, even though less than two miles north, at Trap Rock Quarry, a massive diabase ridge dominates the land.

Flemer purchased his first property, the sixty-five acre Myrick farm, for $9,000 in 1913. The adjoining sixty-five acre Higgins farm was purchased in 1914, followed by the 85-acre Van Dyke farm and the 70-acre Archibald Gulick farm. These four connected purchases totaled 265 acres. After serving with the Ambulance Corps in World War I, Flemer’s son William Flemer, Jr. returned and began purchasing additional properties, building the nursery holdings to about 1,200 acres. Wherever possible, Flemer bought both land and houses, in order to provide housing for nursery employees. Today, nearly 25 historic structures remain, including the Matthias Van Dyke house, “Mapleton,” the oldest section of which was built in 1742 and which still bears scars of British cannon fire and carved signatures and dates as early as 1777. 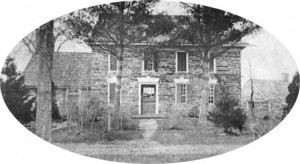 William Flemer, Jr. was industrious and inventive. He built a system of greenhouses, installed a vast irrigation network, and built a water system that not only provided water for the nursery and nursery houses, but also for the village of Kingston. Influenced by the French countryside he had seen during the War, Flemer checkered the landscape with magnificent windbreaks, and lined Mapleton Road with an avenue of plane trees, now some 90 years old. 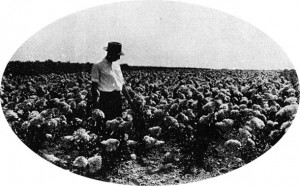 Brothers William Flemer III and John Flemer continued to nurture the business, overseeing the propagation of new cultivars of ornamental trees and shrubs and bringing the nursery to national, even international, prominence. The nurseries were granted dozens of patents on trees including the ‘Shademaster’ locust and ‘Village Green Zelkova’ elm.

In its 85-year history here, Princeton Nurseries introduced important plant varieties including the legendary, disease-resistant Princeton Elm, the ‘October Glory’ Maple, and the ‘Snow Queen’ Hydrangea, many of which still grow on former Princeton Nurseries property. The Flemers also developed innovative horticultural practices and technologies still used today, and fabricated the prototypes for many of their tools in the nursery workshops on Mapleton Road. At its peak, Princeton Nurseries farmed considerable land in South Brunswick, Plainsboro, West Windsor, and Franklin Township–1,200 acres in all. Today, more than 240 acres of the former nursery lands have been preserved, mostly in South Brunswick Township, little changed in character from the days when Princeton Nurseries employed three hundred men and women at its Kingston operation–and provided the village’s water supply!

As development increased in the Kingston area, Princeton Nurseries started purchasing land in Allentown, NJ in 1962 and moved its entire operation there in 1995.  The company closed operations in Spring of 2010; fortunately, its land in Allentown has now been preserved as farmland and open space.

Additional information on the history of Princeton Nurseries can be found on the Kingston Greenways Association web site at: http://www.kingstongreenways.org/pnl/pnl1recollector.html

Information on the history of Kingston can also be found on the Kingston Greenways Association web site at: http://www.kingstongreenways.org/history.html