Four 4-minute videos are now available to view on youtube:

Following a brief business meeting, Mike Aucott gave an illustrated presentation on the American chestnut.  He spoke about the American chestnut’s glorious past, its grievous near-annihilation by blight, and the passionate movement to re-establish its place in our forests. 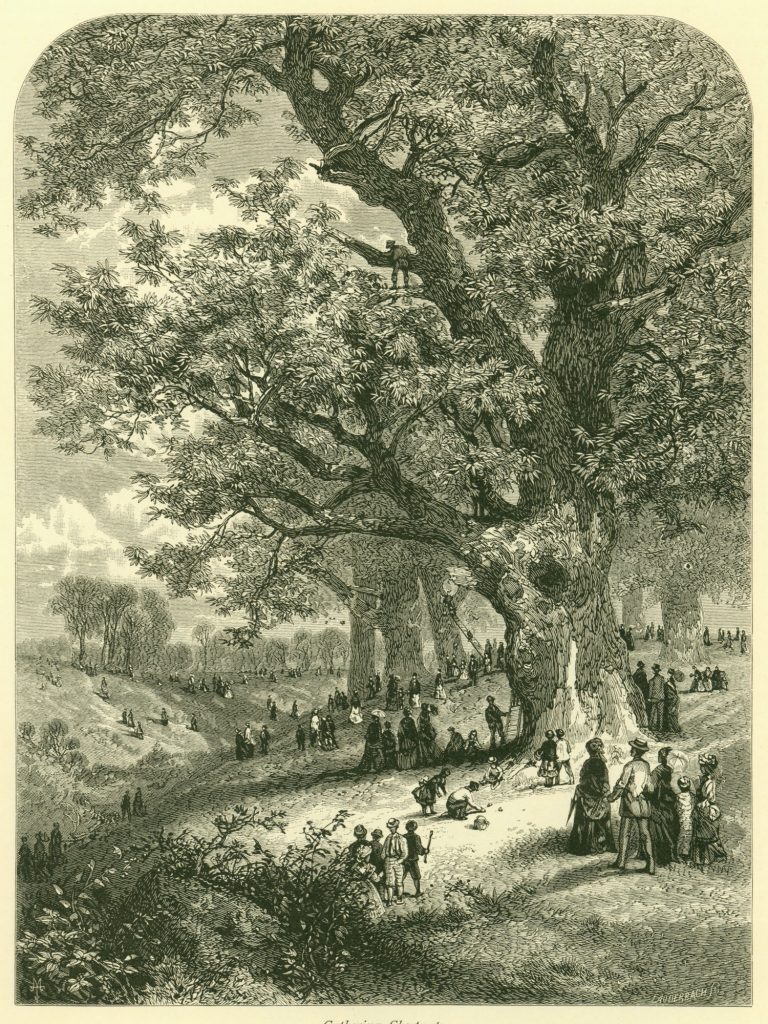 “Gathering Chestnuts,” by J.W. Lauderbach, from The Art Journal of 1878

About our speaker: Mike Aucott retired from his position as a research scientist for the NJ Department of Environmental Protection in 2012. He has a Ph.D. in environmental science from Rutgers University, and now teaches chemistry part-time at The College of New Jersey. He is also a consultant on energy and air pollution issues. Mike is a member of the Hopewell Township Environmental Commission and of the American Chestnut Foundation (TACF) and has helped organize plantings of over 250 American chestnuts in Hopewell Township, NJ, with the hope that some of these may be useful in future breeding efforts. Mike is also coordinating the monitoring and management of 20 orchards, totaling over 5000 trees, of second-generation hybrid chestnuts as part of a TACF breeding program. Mike has been hooked on chestnuts since 5th grade, when a leaf from a stump sprout became the prize of his leaf collection.

“GETTING BY: SURVIVAL STRATEGIES FOR MAKING IT THROUGH THE WINTER” 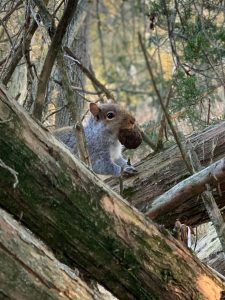 Led by Karen Linder, this walk in the Mapleton Preserve focused on how wild animals (including insects, birds, and even groundhogs) make it through the winter in New Jersey.

A determined group of volunteers worked overtime to complete the cleanup of the Preserve’s signature and beloved ginkgo row. Three cheers for this vigorous crew and their accomplishment! 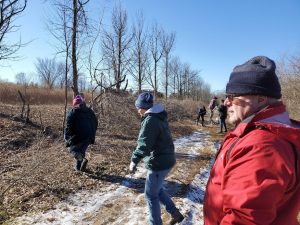 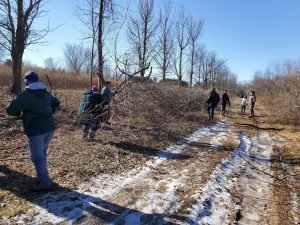 The trash effort focused on the Preserve itself and along Division Street, and Ridge and Mapleton Roads. Most abundant litter, in descending order: drink containers (coffee and plastic cups, plastic water bottles, milk jugs, liquor and beer bottles, beer and soda cans), food containers and snack wrappers, snuff tins (!), plastic bags, car debris (from accidents), and styrofoam. Most unusual item found–a single high-heeled shoe. Most toxic–a car battery. Most endearing–an upside-down metal baking pan in the woods that turned out to be a mouse house! When the pan was lifted and three field mice scurried out of their cozy digs in terror, it was decided to leave the roof over their heads. Thank you to all who participated, collecting eight big bags of trash! 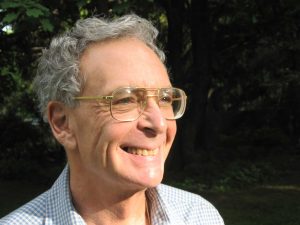 This year, our work session honored our friend Daniel Harris, who passed away peacefully on December 26th. Daniel was a loyal and active member of Friends of Princeton Nursery Lands. He participated in many events over the years, picking up trash, cutting back invasives in the Mapleton Preserve, serving as registrar, and giving an environment-themed reading of his poetry for us. He was a passionate advocate for the environment and for sustainability, and also a committed crusader for social justice. 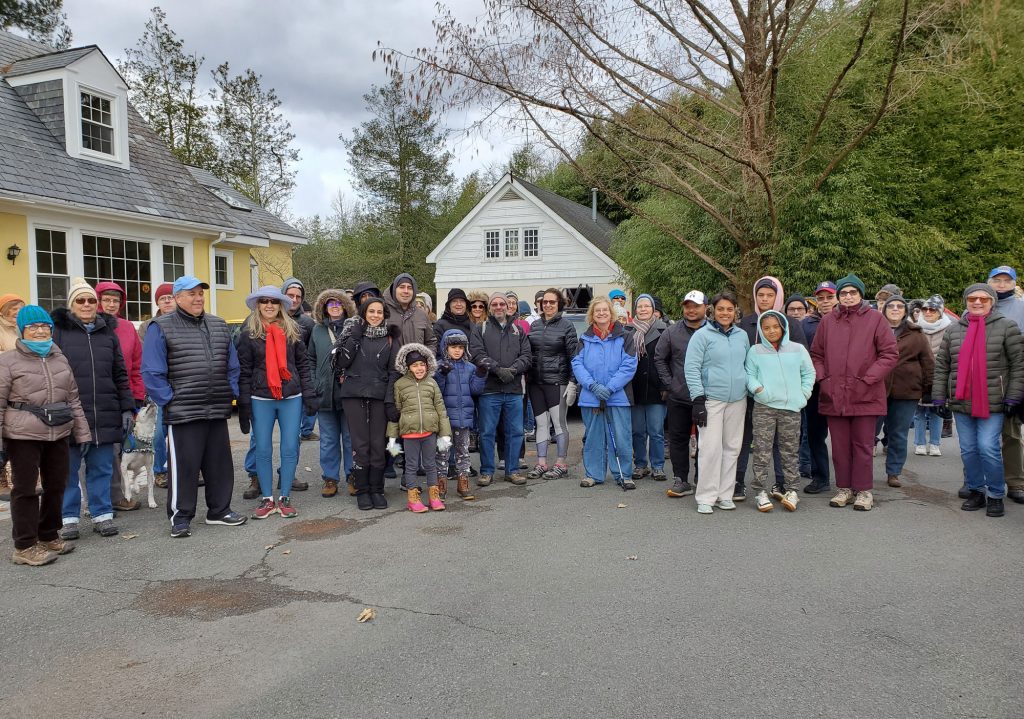 Over 100 people (and several dogs) joined us for a First Day Hike in the Mapleton Preserve. The walk was brisk, as the day was cold! Many stayed to warm up and socialize in the Education Building after the walk. It was a marvelous way to begin a new year! 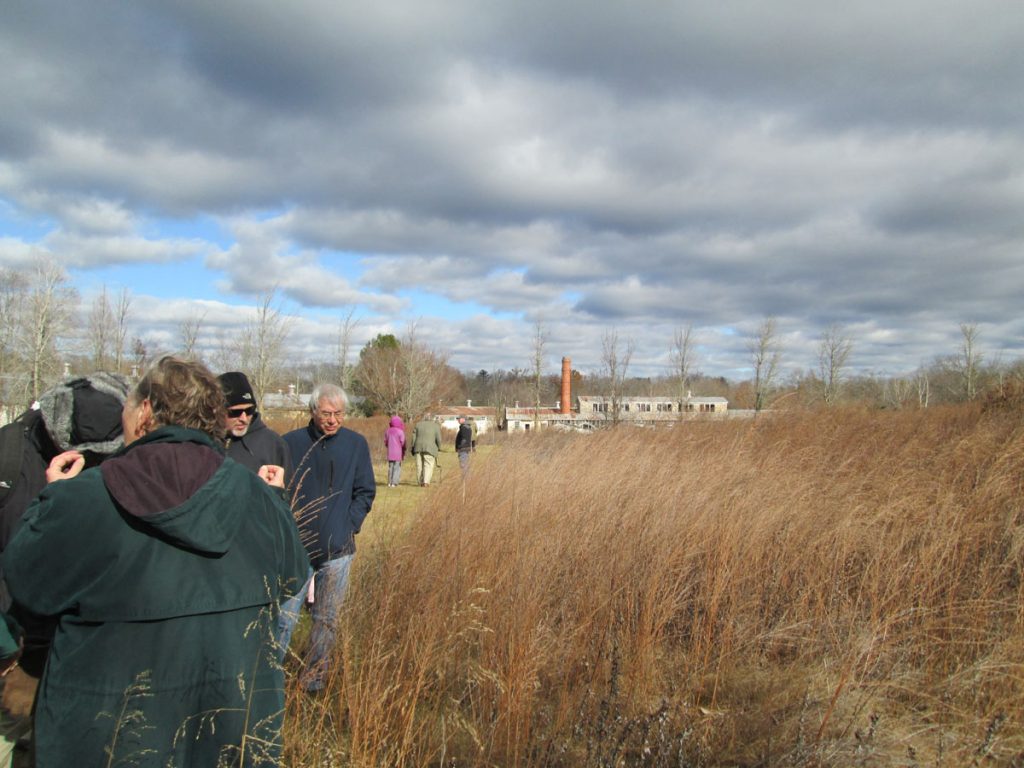 Karen Linder and an enthusiastic group explored the Mapleton Preserve on our annual Thanksgiving Day walk. With the aid of magnifying glasses, we sought out often overlooked natural things, and enjoyed the subtle beauty of late fall. Our thanks to Kirstin Ohrt for the wonderful images below! 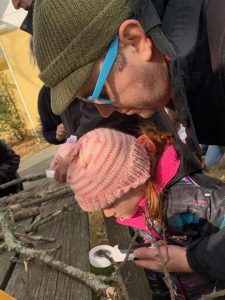 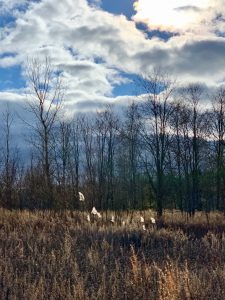 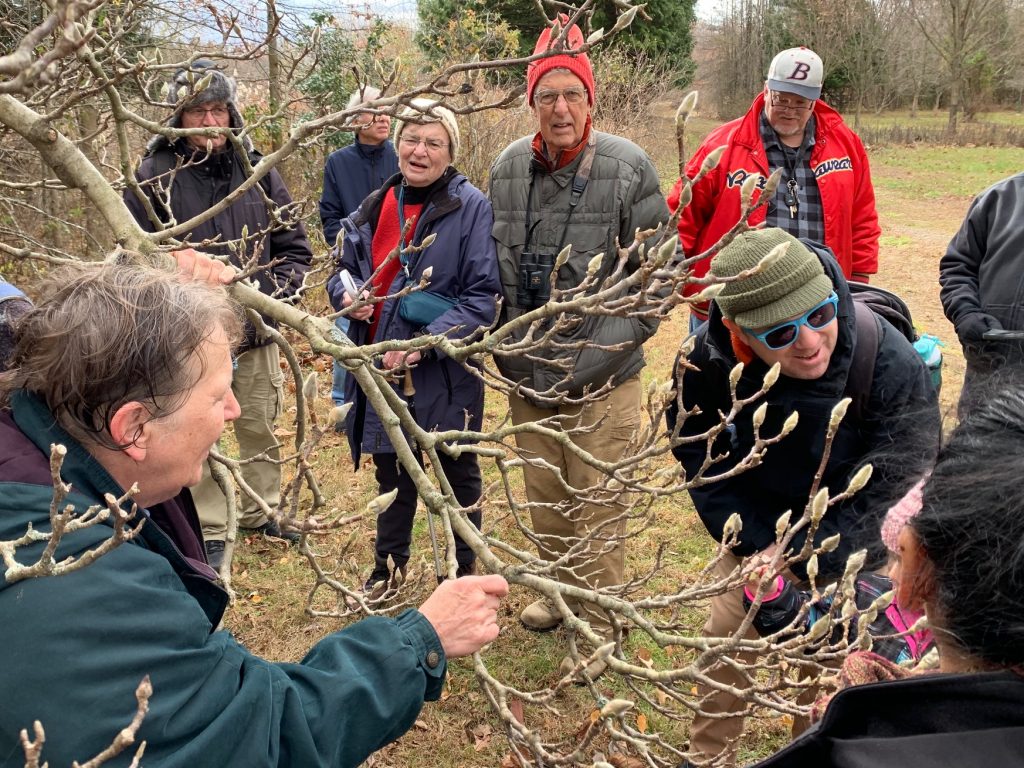 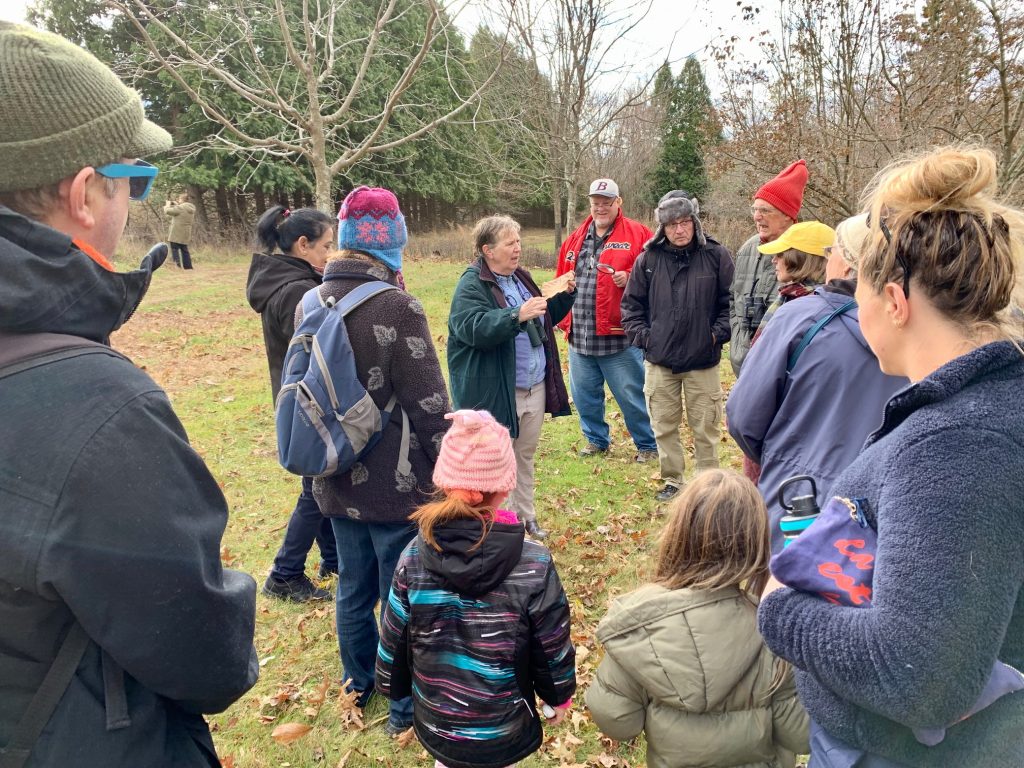 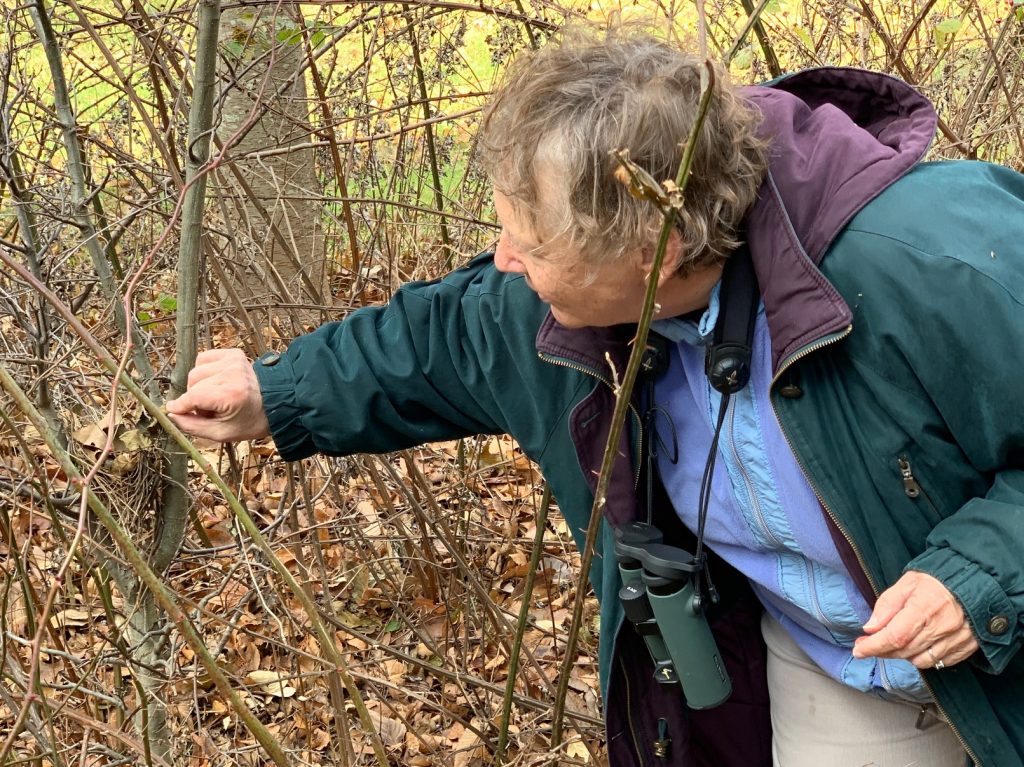 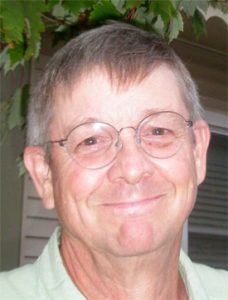 In 1913, William Flemer Sr. bought three farms in Kingston to expand his Springfield, NJ nursery. From that beginning, Princeton Nurseries grew to become one of the world’s largest and most respected producers of ornamental plants. Four generations of the Flemer family, together with many of their Kingston neighbors, lived and worked there. William (Bill) Flemer IV shared their story.

We are indebted to Bob Barth for recording Bill’s talk. The video can be viewed at https://archive.org/details/fpnl_flemer2019

About Bill Flemer: William Flemer IV was born in Princeton and grew up on his family’s Princeton Nurseries property in Kingston. He attended Nassau Street School and Princeton Country Day School, and graduated from Princeton Day School in 1971. He worked on the family nursery during his summers from age 10 on. He attended the University of Wisconsin in Madison, where he studied horticulture. He returned to the family nursery full time in 1978, where he rose to become vice president.

A New Jersey Certified Nurseryman and a New Jersey Certified Tree Expert, Bill has served on both the Borough and Township Shade Tree Commissions in Princeton. He is currently employed at the D&R Greenway Land Trust in Princeton as site manager for the Trust’s St. Michaels Farm Preserve in Hopewell. His main focus there has been the management of a pilot project growing large quantities of native grasses and wildflowers for their seed, a collaboration between D&R Greenway and The Greenbelt Native Plant Center on Staten Island, a division of the Parks Department of the City of New York. He is responsible for stewardship of the land and trails that are enjoyed by the public.

A guitarist and vocalist, his other passion is playing bluegrass and country music with a variety of local bands. 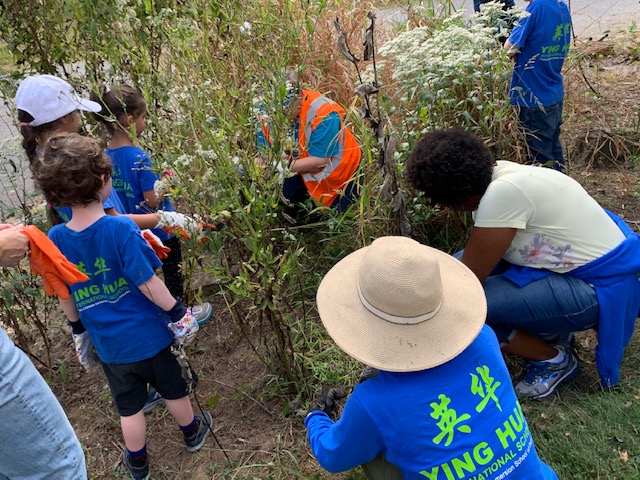 A lively crew, including a group from the YingHua School in Kingston, weeded the butterfly garden, then planted pollinator-attracting plants or seeds–milkweed, butterfly weed, and bee balm. A hardy group addressed vines and shrubs climbing and crowding the ginkgos in the Preserve’s signature tree row. 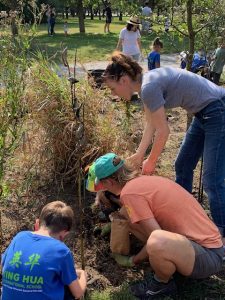 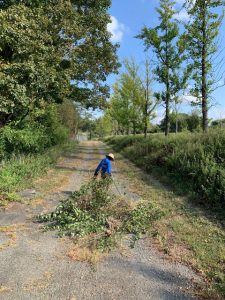 Other volunteers tended trees in the Flemer Arboretum and around Park headquarters, weeding and mulching around them, adjusting plastic fencing to guard against “buck rub,” and pulling off excessive Virginia creeper. 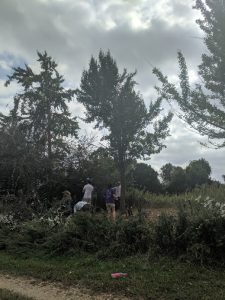 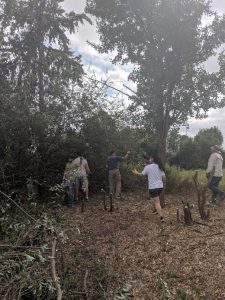 Thank you to everyone who came to help. A wonderful time was had by all!

A WALK AND A “BOOKNIC” 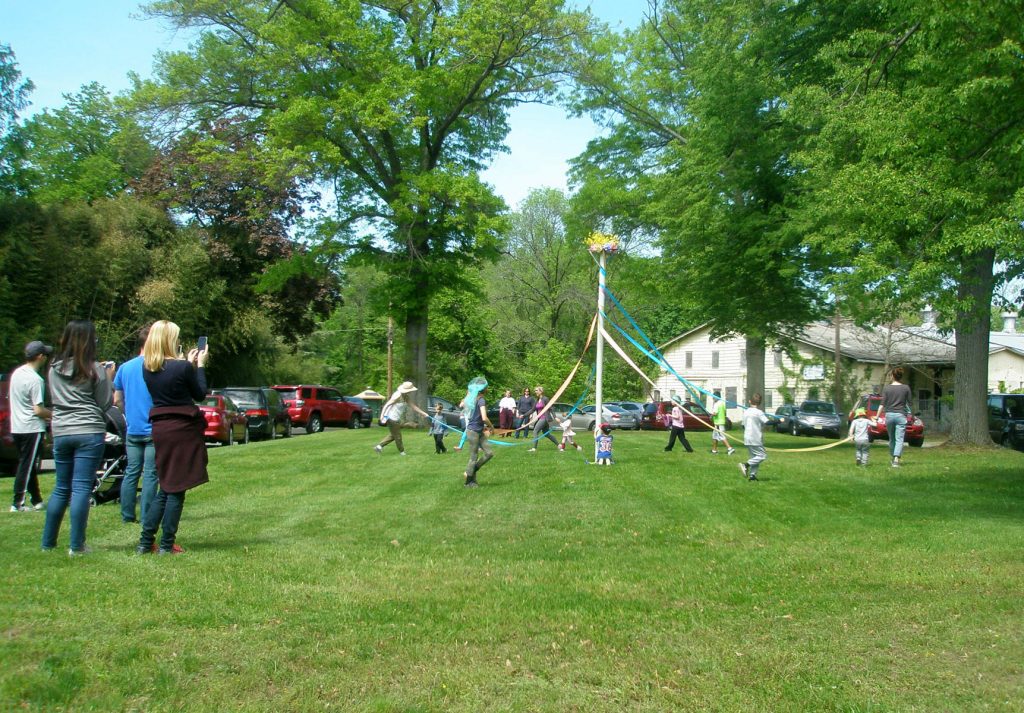 Others enjoyed dancing around a beautiful maypole hand-crafted by trustee BreeAnne Lemmerling. There was also a table loaded with nature-themed books loaned by South Brunswick Public Library, so families could select a book, find a tree, and have a good read in the beautiful Flemer Arboretum. And president Karen Linder supplied fanciful materials for participants to doll up for the occasion. 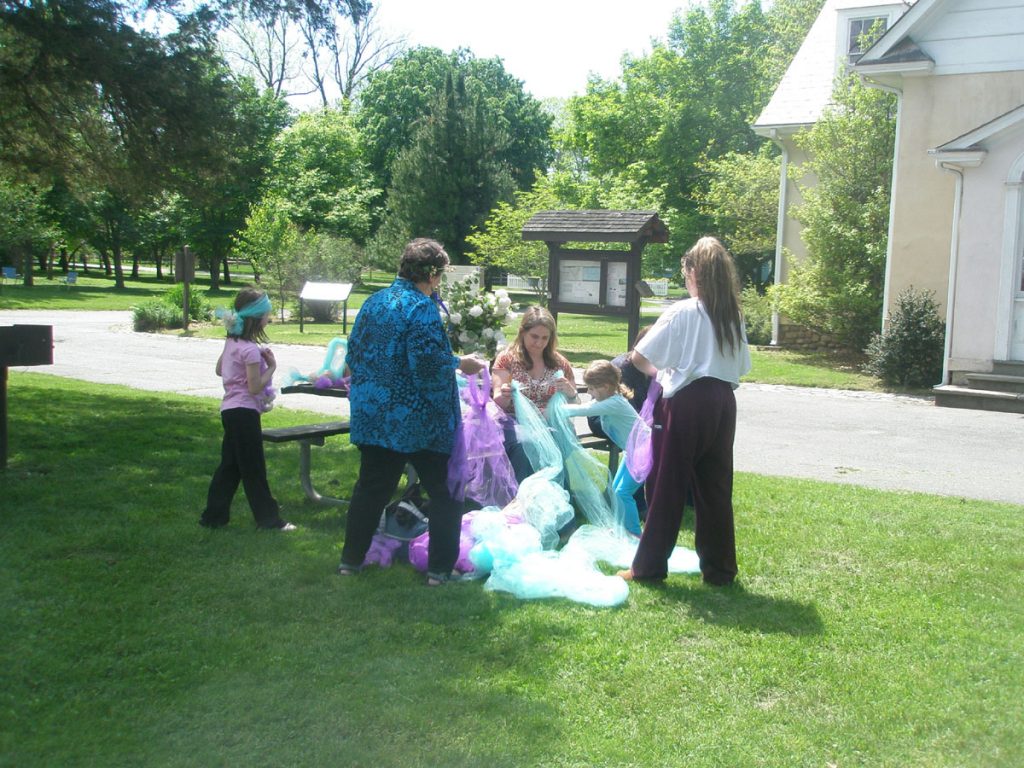 “BARKING UP THE RIGHT TREE” – 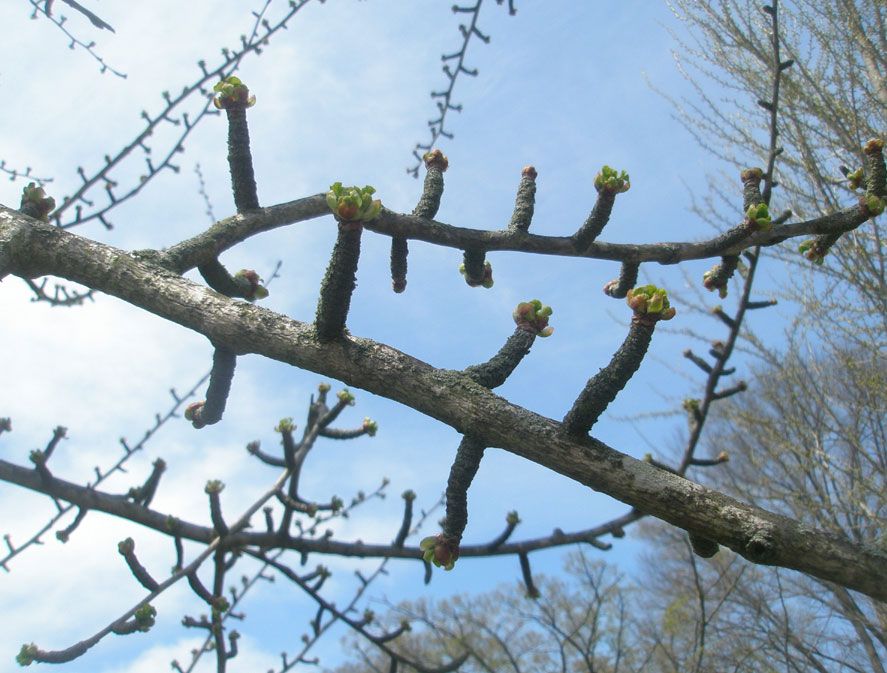 We are grateful to the two hardy crews who helped free the trees in the ginkgo row of vines and invasives, and collected trash along Mapleton Road. A special thank you goes out to our registrars Beryl and Robert, and to our president Karen Linder for providing hot cider and other welcome refreshments. The weather was chilly and breezy, but the atmosphere was warm with energy and fellowship! 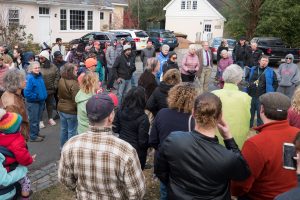 Well over one hundred people walked with us on New Year’s Day, through the Mapleton Preserve, across Mapleton Road to the path between the D&R Canal and the former seedbeds of Princeton Nurseries, on to the turning basin and the Locktender’s House, and back along what we like to call the osage orange trail. Photographer Laura Hawkins captured these terrific photos. A big thank you to her and all who participated for starting the new year off on a bright note! 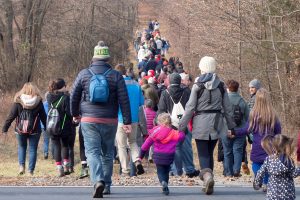 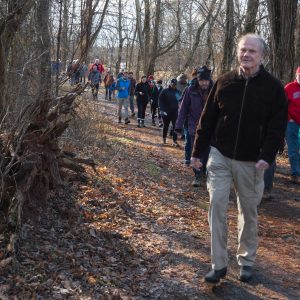 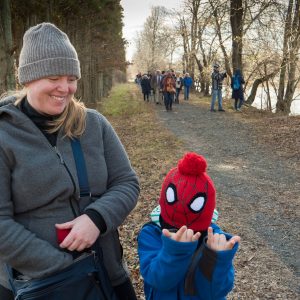 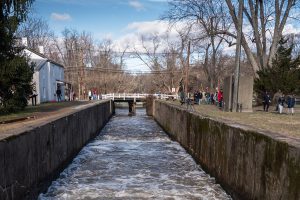 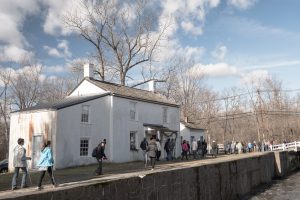 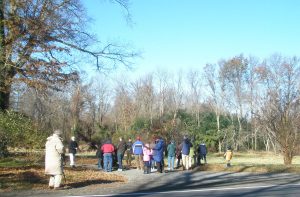 A score of people turned out for our annual Thanksgiving Day morning exploration of the Mapleton Preserve, despite the bitter temperature, to search for signs of our local wildlife and what they might be having for Thanksgiving dinner–a rather different menu from ours! 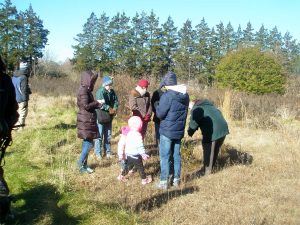 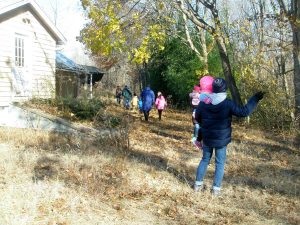